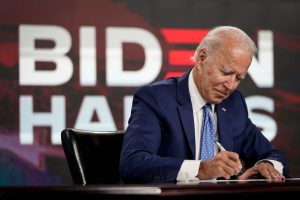 Naija News understands that the executive orders were aimed at revoking some decisions by the outgone president Donald Trump.

Reports revealed that Biden’s executive order includes the process of leaving the World Health Organization, revoking the ban on entries from mostly Muslim-majority countries, bolstering environmental protections and strengthening the fight against Covid-19.

“We are going to combat climate change in a way we have not done so far,” said the US president.

It was also noted that Biden is making a move to rejoin the Paris climate accord.

Meanwhile, former President of the United States of America, Donald Trump, has arrived at his home in Mar-a-Lago, Florida, after leaving the White House for the last time.

Naija News reports that Trump flew to Palm Beach aboard Air Force One while inauguration ceremony of Joe Biden was ongoing and thereafter travelled in a motorcade to his home.