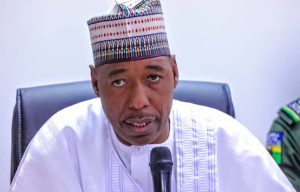 Governor Babagana Zulum of Borno State has approved the appointment of Abba Umar Jato as the new Shehu of Dikwa.

Recall that the Masta’s death was announced by the Secretary to State Government, Alhaji Usman Jidda Shuwa in Biu, shortly after the presentation of Staff of Office to the Emir of Biu, Alhaji Mai Mustapha Umar Mustapha by Governor Babagana Umara Zulum on last Saturday.

He had been flown to Abuja a day before his death last Friday.

Alhaji Abba Tor Shehu Masta II, was appointed by the former Borno State Governor Ali Modu Sheriff towards the end of his second tenure in March 2010 as Shehu of the newly created Dikwa Emirate.