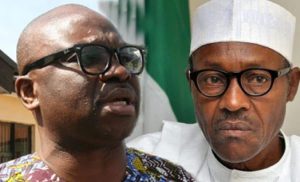 The former Governor of Ekiti State, Ayodele Fayose, has lambasted President Muhammadu Buhari over the latest Boko Haram at a military base in Borno State.

Naija News understands that the former governor was reacting to reports that Boko Haram insurgents attacked and successfully dislodge soldiers from a military base in Marte, Borno State, Northeast Nigeria.

But the Defence Headquarters in a swift statement denied Boko Haram success in the attack, instead, the DHQ stated that its troops successfully repelled the insurgents attack.

In a series of post on his verified Twitter handle, Fayose claimed that President Buhari has proven him right about his 2015 assertion that he lacks the capacity to rule Nigeria.

Fayose wrote: “Less than 4 days after President Buhari gleefully told Nigerians that security situation in the North-East under him is better than what it used to be, terrorists attacked and captured a Military Base in Borno State!

“A whole Military Base captured by terrorists! Isn’t this a “job well done” by the President and his obsolete Service Chiefs?

“They are indeed “doing well for keeping the country safer than the President met it.

“Now Nigerians can appreciate why I insisted in 2015 that Buhari lacked the needed capacity to rule Nigeria.

“As for Nigerians, we are all on our own waiting for God’s deliverance from these taskmasters.”