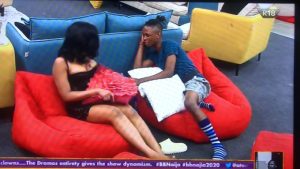 Winner of the Big Brother Naija reality TV show, 2020 Lockdown edition, Olamilekan Agbeleshebioba, popularly known as Laycon has opened up on the failed relationship between himself and Erica, a fellow housemate during the show.

According to Laycon, he had to move on when he discovered Erica couldn’t love him the way he loved her. He added that it was however not easy to move on because they were in an enclosed environment.

The reality show winner added that he needed his space and wanted to talk about it but it was difficult because of the setting for the show.

He revealed his mind while speaking on Thursday when the first five episodes of his reality show, ‘I am Laycon’ premiered exclusively on Showmax.

The first episode of the show focused on his failed relationship with Erica, shedding more light on how the love relationship between the rapper and disqualified housemate, Erica Nlewedim turned sour.

Laycon said: “So in a house, where we were just twenty of us and I’m sorry, how was I supposed to deal with that issue if not talk about it? Cause even when I’m outside the house, I talked about it.

“I needed space, I need space. I try to give space as much as possible but in the house…that we were together in, that was hard for me. And talking about it kind of helped me mentally go through it. So, that’s that.”

DJ Cuppy had challenged Isreal after he gave the reason behind Zlatan Ibile and DJ Cuppy’s fight. Israel in his statement had described the disc jokey as a fake friend.

He further stated that Cuppy used Zlatan and never paid him despite the billions received from their hit collabo.

The statement, however, did not sit down well with Cuppy who disclosed on her Twitter account that she will be suing Israel for defamation.

She further revealed that there had been no breaches of her contractual agreement regarding the song, Gelato as confirmed by her lawyers.