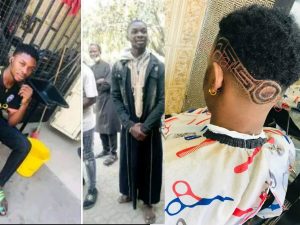 The Senator representing Benue South Senatorial District in the National Assembly, Comrade Abba Moro, has confirmed the released of young talented barber arrested in Kano over hairstyle allegedly against Islam.

It could be recalled that a young professional barber, Elijah Odeh, was arrested a week ago for allegedly violating Islamic code of conduct by giving his customers hairstyle that ‘insults Islam’.

Naija News reports that the barber hailed from Adum East, in Obi Local Government Area of Benue State, but was arrested in Kano where he lives. The development, however, stirred a barrage of reactions on social media as concerned citizens condemned Odeh’s arrest by the Islamic extremists.

Subsequently, Kano State Police Command in a statement made available to newsmen denied arresting Elijah Ode for blasphemy. Reacting to the report, Police PRO in Kano, Abdullahi Haruna said Ode was arrested for alleged rape and not blasphemy as reported by the media.

He accused some people who want to cause trouble for spreading false news that the barber was arrested for alleged blasphemy.

Also, an official of the state Islamic police better known as Hisbah denied Ode’s arrest. “We don’t have anyone like that with us”, the official said.

However, the case against the barber was struck out on Wednesday, by the same Judge who refused to grant him bail earlier.

Confirming the development on Facebook earlier, Comrade Moro wrote: “I’m pleased to announce the release of Elijah Odeh, a young barber from Obi LGA arrested and detained in Kano State over hairstyle he designed on two of his customers. The case was struck out today,”

He added: “Like I said the other day, I won’t allow any of my Constituents, anywhere in the country, suffer unjustly as long as I remain their Senator,”

“Many thanks to Governor Samuel Ortom and all those who, in one way or the other, lent their voices in the struggle to get the young man released. It’s victory for all of us!”

In another news, a Cameroon court has sentenced two of its citizens to prison for allegedly involved in homosexuality, Naija News reports.