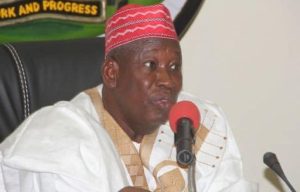 The Kano State Governor, Abdullahi Ganduje has recommended the ban of the movement of cattle and herdsmen from the Northern part of Nigeria to other regions as a way of curbing the frequent farmer-herdsmen crisis in the country.

Ganduje made the submission in Daura Katsina State while speaking with newsmen, noting that a law should be enacted to ban the movement as a way of ending the crisis.

The Governor noted that his administration is already building a Ruga settlement in Kano State located in a forest near Kano’s border with Katsina to prevent the movement of herdsmen with their cattle and prevent clashes with farmers when the cattle destroy the farmlands.

He noted that the settlement will have facilities such as a dam, artificial insemination centre, veterinary clinic and houses for the herdsmen.

He said: “We are building a Ruga settlement in Samsosua forest, our border with Katsina and we have succeeded in curtailing the effect of banditry in that area,” Ganduje said.

Meanwhile, Governor AbdulRahman AbdulRazaq led government of Kwara State has vowed to prioritise the lives of its citizens as Fulani herders troop into the state.

The government assured residents that necessary measures had been taken to ensure good report between host communities and herders in the state.

In agreement with the government’s effort to ensure no crisis between herders and host communities, the leadership of Miyetti Allah also warned against night grazing or cattle grazing by underage persons.