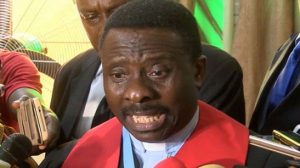 The Christian Association of Nigeria (CAN) has condemned the Department of State Services (DSS) for raising an alarm over the threat by some people to cause ethno-religious violence in some parts of the country.

Naija News had reported that the intelligence agency on Wednesday said some persons and groups are planning to destabilize some parts of the country, similar threat it issued in January.

A statement by the DSS Spokesman, Peter Afunanya, read: “For the umpteenth time, the Service strongly warns these elements to desist forthwith from their (planned) nefarious acts or face the full wraths of the law,”

“The DSS will, in collaboration with other security and law enforcement agencies, take necessary steps to ensure the safety of lives and property of the citizenry.”

Reacting to the security alert in a statement on Wednesday, CAN asked the secret police to arrest bandits killing Nigerians instead of always raising the alarm.

The statement signed by Adebayo Oladeji, spokesman for CAN President, Samson Ayokunle, urged the agency to focus on tackling terrorists, bandits, kidnappers, and other criminal elements causing trouble in the country.

He said: “Whenever the DSS raises alarm over the security of the country, ordinarily, one should take them seriously because of the fact that their primary responsibility includes, but not limited to intelligence gathering.

“We recall that they raised similar alarm recently. But how many suspects were arrested, detained and arraigned? All the killings in the country have been happening without bringing those responsible to book. Are they not aware? People are being kidnapped on the highways and in their residences without any arrest. We wonder why? Those who are shedding the innocent blood and those who are kidnapping for ransom are they spirits? This doesn’t speak well of us as a nation.

“Terrorists, bandits, kidnappers and other criminals are not invincible and until they are apprehended and successfully prosecuted, people will no longer have respect for those who are in charge of the security. The media should stand up and asked our government serious questions through front page comments and editorial. Things are becoming increasingly complicated daily. Criminals are operating as if our security agencies are on holidays.

“CAN has been calling for total overhauling of the security architecture, but that has fallen on deaf ears. May God deliver us from those criminals who are now operating with impunity.”