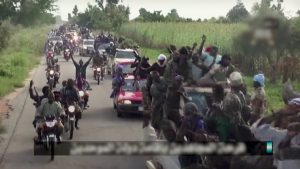 The Nigerian Army has reacted to the clash between the Abubakar Shekau faction of Boko Haram and members of the Islamic State West Africa Province (ISWAP).

Recall that the battle between the two terror groups reportedly took place in Sunawa, a border area between Nigeria and the Niger Republic.

The clash resulted in the death of many fighters from both sides but more from the ISWAP camp, Naija News gathered.

A report on the incident, monitored on the BBC Hausa website also has it that ISWAP abducted dozens of women linked to Boko Haram which prompted the counter-attack to rescue the abducted women.

Reacting to the development on Monday, spokesperson of the Army, Mohammed Yerima said the incident has exposed the disorganized nature of Boko Haram.

“The Nigerian army in recent operations under the leadership of the Chief of Army Staff (COAS), Major General Ibrahim Attahiru, has continued to dismantle all logistics and operational bases of the insurgents along the Lake Chad Basin axis and Sambisa forest area,” he said.

“The troops in one of its operations along Sambisa forest discovered and destroyed Abubakar Shekau’ farm and rescued abducted victims.

“The Nigerian army wishes to use this medium to reassure Nigerians of the determination of troops to clear the remnant terrorists out of the Nigerian territory.”