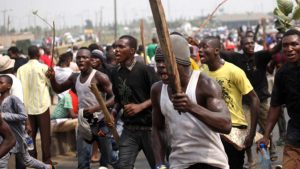 No fewer than twenty-two persons reportedly lost their lives between May 2020 and January 2021 in a communal fight between residents of Abia State and the neighbouring community of Akwa Ibom.

Naija News understands that the casualties were mostly recorded in Usaka Ukwu and Azuncchai communities of Ikwuano Local Government Area of Abia.

It was gathered that the series of clashes occurred over disagreements on land ownership. Addressing reporters on Monday, February 1, stakeholders from the area including traditional rulers, the local government Chairman, Chief Steven Mpamaugo, President Generals, Chairmen of Development Associations among others called on the government to intervene into the lingering matter.

Submissions by the Abia community people revealed that 16 people were killed in Usaka Ukwu while four others from Azunchai were also murdered by their Nkari neighbours of Ini and Oboto Akara LGA in Akwa Ibom State.

They added that three of the army personnel who were in the area to restore peace were also attacked and wounded by the Akwa Ibom people who also allegedly took their vehicle and riffles.

One of the soldiers was said to have died while receiving treatment at a hospital.

The President General of Usaka Ukwu, Chief B.C Mgbaramuko, disclosed that the “greedy expansionist objective” of the Akwa Ibom people with the support of their state government had even “surveyed our land where the Army from the Ohafia military Command established a checkpoint.”

He noted that farming activities in the area had stopped over fears that there could be further attacks by their Akwa Ibom neighbours.

Mgbaramuko, however, urged the National Boundary Commission to step in for “proper delineation of the original boundaries” and called on the Akwa Ibom Government to compensate the families of those killed by its people between May 2020 and January 2021.

The Abia State communities begged for the establishment of police/military checkpoints at all strategic spots demand that the government step up its commitment in settling the matter with its Akwa Ibom State counterpart through the National Boundary Commission.

Meanwhile, Abia State Governor, Okezie Ikpeazu has categorically stated that his government will not yield an inch of Abia territory to neighbouring states with expansionist agenda, adding that his administration shall use every lawful means to protect and safeguard every inch of the territory of Abia State.

Ikpeazu said he responded to distress calls from the community on the invasion of their homeland by hoodlums from a neighbouring community in Akwa, adding that the lingering boundary dispute is before the National Boundaries Commission and “until a final determination is made, the area remains in Abia State”.

In another news, Niger Delta has been considered unsafe for oil firms to return for operation without first tackling the current security challenges in the region.

Reacting to a series of calls for the return of oil companies to the region, the Minister of State for Petroleum Resources, Timipre Sylva, said peace and security must be restored first so that the firms can confidently return for operation, Naija News reports.