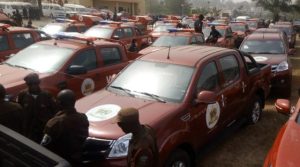 The Ondo State chapter of the Western Security Network Agency better known as Amotekun has revealed those responsible for the killing of a farmer in Ondo.

Reacting to the news making the rounds that two citizens, a vigilante and a farmer were murdered by some herdsmen at Jugbere Farm Settlement in Owo, the Director-General of the Amotekun Corps, Adetunji Adeleye said it was miners that killed the farmer.

Adetunji revealed that the security outfit has arrested at least four persons in connection to the incidents which happened on Thursday, February 11. He further denied the claims that the said people were killed in a crossfire.

He said; “On the issue of arrest, we arrested a number of suspects that are directly connected from the preliminary investigations with either kidnapping, illegal mining, armed robbery in the farmland and farm destruction.

“We are working on that and in the appropriate time, they will be handed over to the relevant security agencies for further investigations and prosecution where necessary.

“In one of the operations that we are involved in, it’s alleged that so many members of the Ondo State Security Network Agency, Amotekun Corps were killed.

“I want to say that not a single soul out of the ones I recruited died at any point in time. And specifically on the Owo Ute incident, no single member of the corps or officer died during this particular operation,” Adetunje reiterated.

“So, the area where the crisis actually happened was predominantly occupied by the workers of this dastardly act. What I mean by that is some of them are either working as kidnappers or working as illegal miners. A good number of them also had their cattle destroying the farm settlement and the farm around.

“In the cause of the quarrel, they went to a nearby village and even set it ablaze and our vehicle happened to be parked around that same village which they set ablaze,” he added.