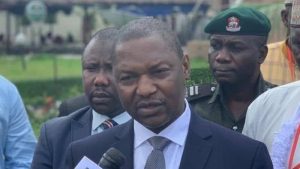 The Attorney-General of the Federation and Minister of Justice, Abubakar Malami, has denied rumours that he is planning to contest for the 2023 governorship election in Kebbi.

Malami, in a statement on Friday by his spokesman, Umar Jibrilu-Gwandu, also distance himself from the governorship campaign posters that have allegedly surfaced in the state.

The minister, however, denied media reports that his 2023 campaign posters had flooded streets across the state. Malmai described the story about his campaign posters a total lie and fake news.

He said: “Our attention has been drawn to the fictitious, mischievous report claiming that the posters of the Attorney General of the Federation and Minister of Justice vying for the 2023 governorship poll have flooded everywhere in the state.

“We have gone round the city with journalists; they have seen it by themselves that the report lacked iota of truth. We have not seen any of such posters in Birnin Kebbi.

“We, therefore, want the general public to disregard such information because it was just the figment of the imagination of the author.”

Malami noted that he has lots of supporters in the state that might have interest in him based on his humanitarian services and goodwill.

“A situation where someone will fabricate lies in the name of journalism sends a bad signal to the profession.

“If you could recall, on March 16, 2020, Malami urged his supporters to exercise restrain over his 2023 governorship campaign, as it was not yet time for political campaigns in view of the provisions of Electoral Act and extant laws of the Federation,” he said.