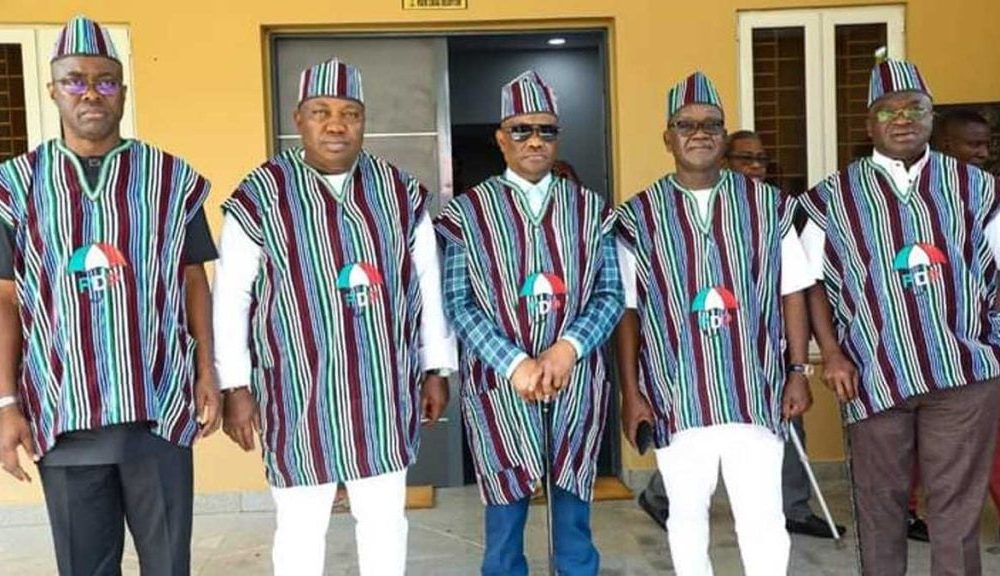 There are indications that the five aggrieved Governors of the Peoples Democratic Party (PDP) may shun the inauguration of Senator Ademola Adeleke as the governor of Osun State.

Naija News learned that the governors may stay away from the event due to the fact that the PDP Presidential candidate, Atiku Abubakar, and the party’s National Chairman, Iyorchia Ayu, are set to attend the ceremony.

The five governors had vowed to steer clear of the party’s presidential campaign activities until Ayu resigns from office for a Southerner to take over.

Traditionally, governors of the party of a governor-elect being inaugurated had always added flavour to the swearing-in with their attendance since off-season elections began in the polity.

It was gathered that the five PDP governors had yet to make arrangements to attend today’s event in Osogbo, the state capital as of Friday night.

A source close to the G5 Governors told Sunday Vanguard it was unlikely that any of the governors would attend.

The source, who spoke on the condition of anonymity, said Wike and his colleagues have absolutely nothing against Senator Adeleke, because he is joining their ranks as governor.

According to the PDP chieftain, the concerns of the G5 Governors are yet to be addressed by the party leadership.

He said, “It is unlikely that any of them will attend.

“They have absolutely nothing against the brand new governor of Osun State, Senator Ademola Adeleke, because he is joining their ranks as governor but the concerns of the G5 Governors are yet to be addressed by the party leadership.

“Their thinking is that appearing in public events of any nature with the Ayu-led PDP NWC can be misinterpreted to mean they have buckled.

“Recall that Governor Makinde who was appointed DG of the National Campaign Council for the Osun PDP governorship election, was unavailable during the campaigns.”

Regarding today’s inauguration, the Chief Press Secretary to the Oyo governor, Taiwo Adisa, could not confirm if his principal would be in attendance.

In an interview with the Vanguard, Adisa stated that he was yet to be briefed on the matter.

Also, media aide to governor Ortom, Nathaniel Ikyur, said he couldn’t confirm whether or not he will be attending.