The Punch: Aircraft in the Presidential Air Fleet are at the risk of being impounded by foreign creditors, Saturday PUNCH has learnt.

Findings indicated that the PAF was indebted to several service providers for various upgrades carried out on the 10 aircraft in the fleet to meet the required airworthiness.

The PAF provides secure airlift to the President, the Vice-President, their immediate families and other top government officials.

However, due to inadequate funding, it was gathered that some installations on the aircraft had again been postponed to 2023.

The PAF Commander, Air Vice Marshal Abubakar Abdullahi, who stated these in his budget defence presentation at the National Assembly, also complained that only N1.5bn was allocated for the maintenance of the aircraft out of the proposed N4.5bn.

The PUNCH had earlier reported that the budgetary allocation to the PAF had risen by 121 per cent in eight years.

Findings indicate that the President, Muhammadu Buhari had since 2016 allocated N81.80bn for the PAF maintenance and foreign trips. 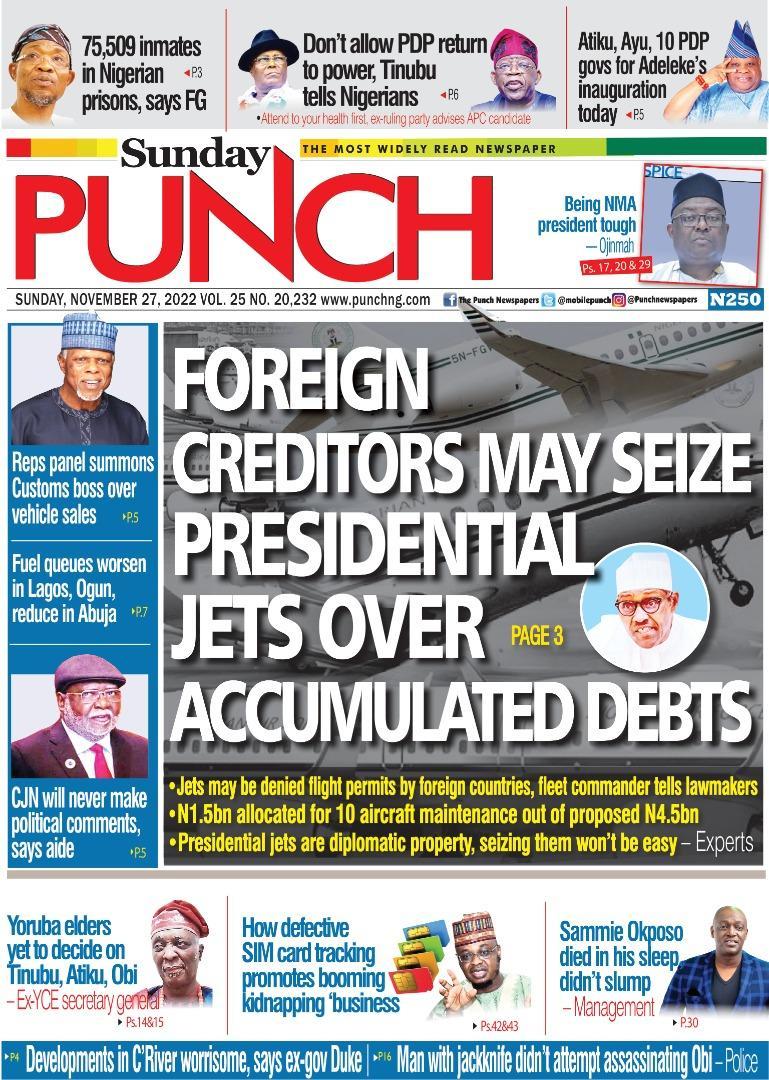 The Nation: The list of dignitaries was no less intimidating. No fewer than 10 governors of the party were in attendance.
Members of the Federal Executive Council and federal and state legislators also came aplenty as were party officials.

Adding glamour to the rally were several Nollywood actors and actresses and even masquerades.

Non-indigene groups from across the state were also there to show their support.

Tinubu, accompanied by his running mate Senator Kashim Shettima, the APC National Chairman Senator Adamu Abdullahi, the Director-General of his campaign organisation Simon Lalong and the APC governors as well as other dignitaries, had driven into the arena in an open roof double-decker bus amidst cheers from supporters who had lined the roads.

Addressing the rally, Tinubu promised to set up a government of inclusion, if elected. 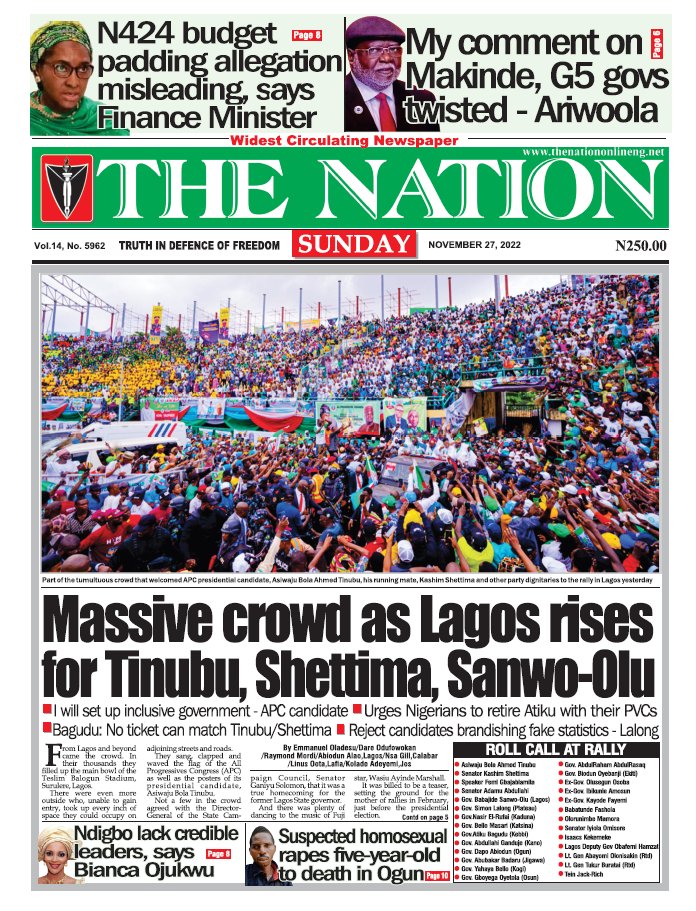 The Guardian: The presidential candidate of the All Progressives Congress (APC), Asiwaju Bola Ahmed Tinubu, yesterday, burst the bubbles of those who fantasise with the morbid fascination of seeing him dead.

At a rally in support of his presidential bid, organised by the Lagos State government, at Teslim Balogun Stadium, Surulere, the former Lagos State Governor assured his supporters that, “I cannot be killed.”

As he has done of late, he seized the opportunity to knock his Peoples Democratic Party (PDP) counterpart, urging would-be voters to once again reject the “selfish Atiku Abubakar, who has been running for the Presidency since 1999.”

He, however, promised to form a progressive government with massive investment in education, health, infrastructure, and job creation if elected as president, even as he assured Nigerians of better days ahead. 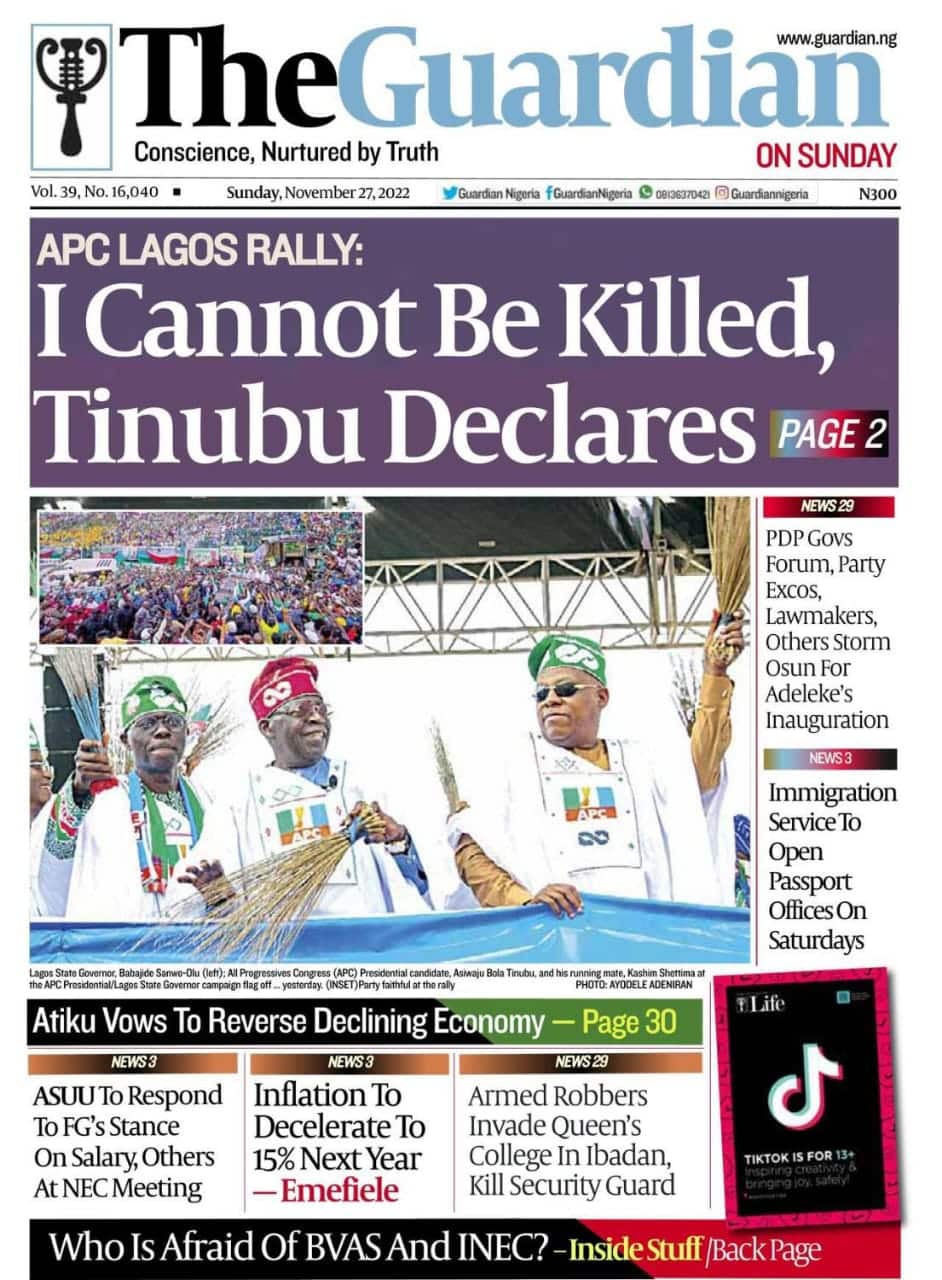 Vanguard: The Chief Justice of Nigeria, CJN, Justice Olukayode Ariwoola, yesterday, after appearing to have been caught in political fray, dissociated himself from a purported statement on the activities of the aggrieved governors of the Peoples Democratic Party, PDP, otherwise known as G5 Governors.

This happened as the PDP accused the CJN of meddlesomeness and dabbling in the internal affairs of the party.

Ariwoola was reported to have said that he was happy that the governor of Oyo State, Seyi Makinde, is a member of G5 Governors.

Critics had imputed that the statement exposed the head of the judiciary as supporting politicians when he was supposed to be apolitical given the nature of the sensitive office he holds.

They cited two instances. First, the CJN was hosted to a reception after he assumed office by Makinde, one of the five PDP governors, where he was quoted as making the controversial statement.Ariwoola was also hosted by Wike in Port-Harcourt on Friday, an event that also had in attendance all the members of the G5 Governors.

But in the Friday event, the CJN was not the only judicial officers hosted by the Rivers governor.

In attendance were many other judicial officers from across Nigeria. 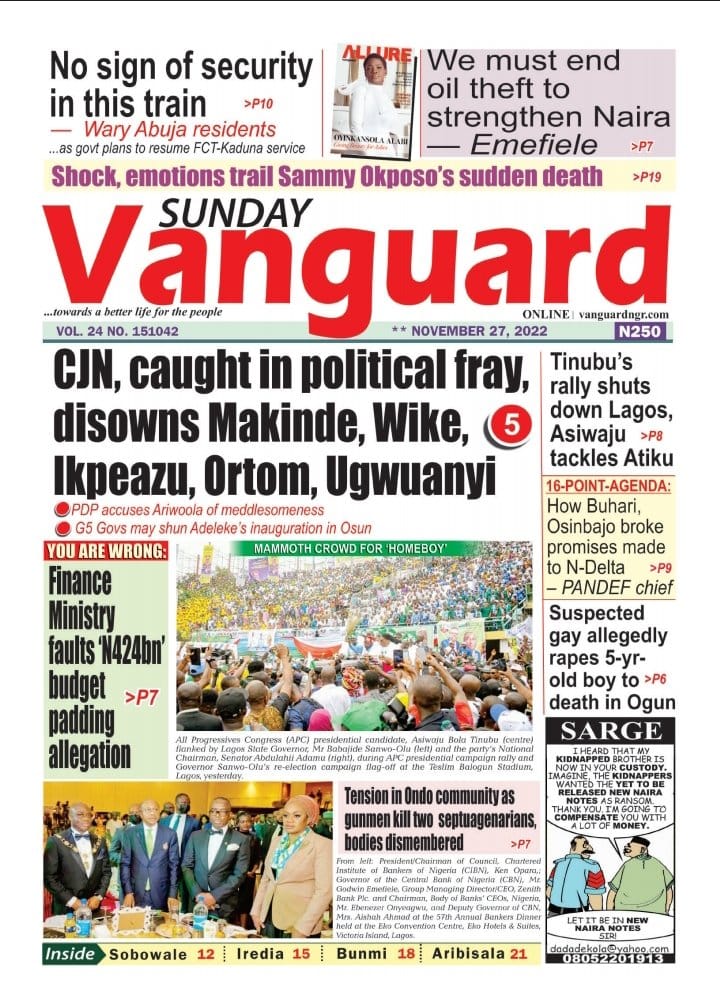 Independent: Ahead the 2023 general elections, some Nigerians have identified some key elements that may dent the credibility of the elec­toral process.

Among these is the endemic secu­rity challenge which may prevent the exercise from being held in some places which, up to this time, are in the grip of terrorists or bandits.

Similarly, in recent times, there has been an upsurge in attacks on the facil­ities and materials of the Independent National Electoral Commission (INEC). Thus, some voters may not get their PVCs before the election.

Comrade Ayoyinka Peter Oni, the La­gos State chairman of the African Action Congress (AAC), stressed that the main challenge of the electoral umpire will be its corrupt officials. 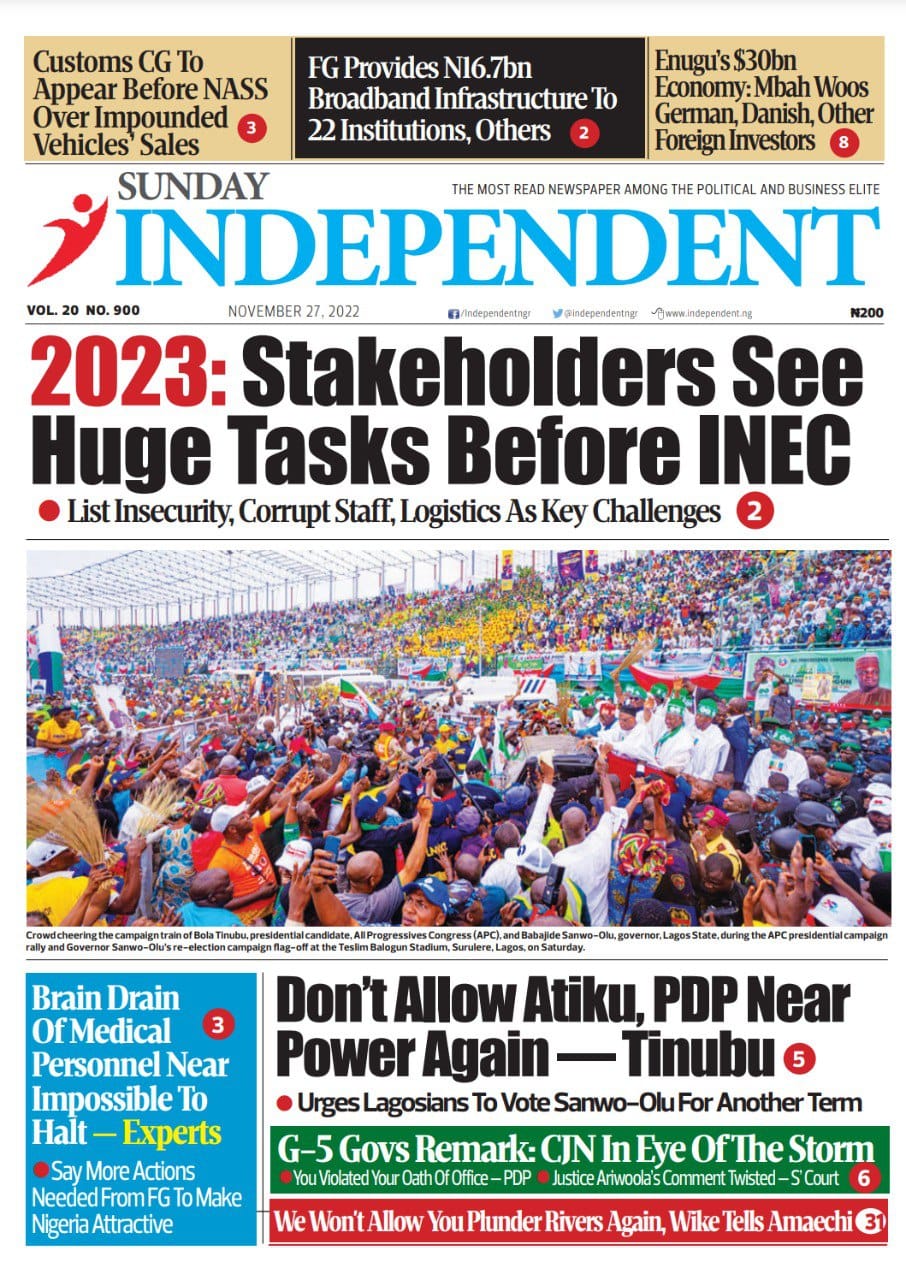 This Day: The Peoples Democratic Party (PDP) yesterday cautioned the Chief Justice of Nigeria (CJN), Justice Olukayode Ariwoola, against partisanship and making utterances that could erode the integrity of the judiciary.
Justice Ariwoola had last Thursday, in Port Harcourt, said he was happy with the Oyo State Governor, Mr. Seyi Makinde’s membership of the G-5 governors led by Governor Nyesom Wike of Rivers State.

But in a swift reaction, the Supreme Court clarified that the comment credited to the CJN was twisted and misrepresented by the media.

The five aggrieved governors are insisting that the National Chairman of PDP, Senator Iyorcha Ayu, must step down to pave the way for someone from the South to succeed him, since the party’s presidential candidate, Atiku Abubakar, hails from the North.

Justice Ariwoola, who spoke during a banquet held in his honour by Wike, had backed Makinde, the governor of his home state, for his membership of the G-5.

Speaking on a lighter note, the CJN, who was in Port Harcourt as the Special Guest of Honour to inaugurate projects completed by the Rivers State Government, disclosed that Wike was threatening to withdraw Makinde’s wife, who is from Rivers, from Makinde.

He expressed the hope that Makinde would emulate Wike to replicate the good works in his state.

In the statement signed by the National Publicity Secretary of the party, Mr. Debo Ologunagba, the main opposition party argued that the CJN delved into its internal affairs with a comment that encouraged division in the party.

The main opposition party described the CJN’s action as unacceptable and inconsistent with his status as the head of the judicial arm of government. 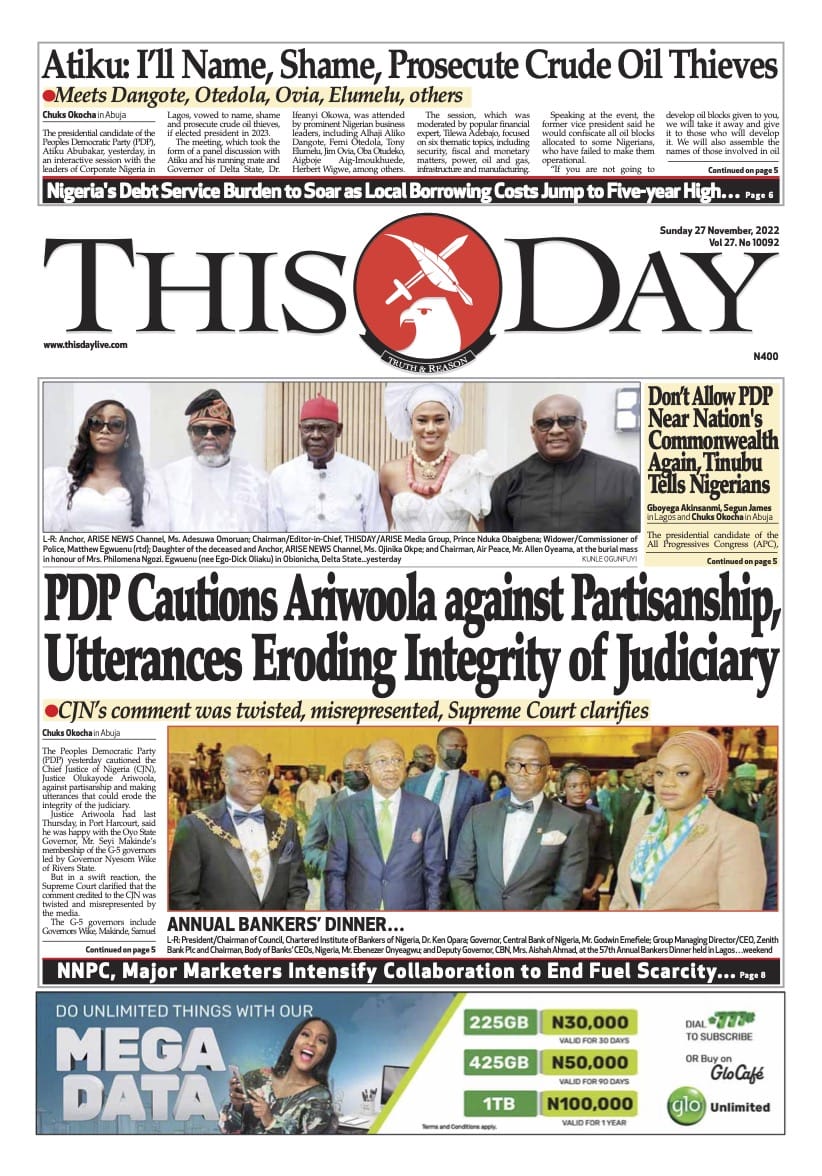 Thank you for reading, that is all for today, see you again tomorrow for a review of Nigerian newspapers.