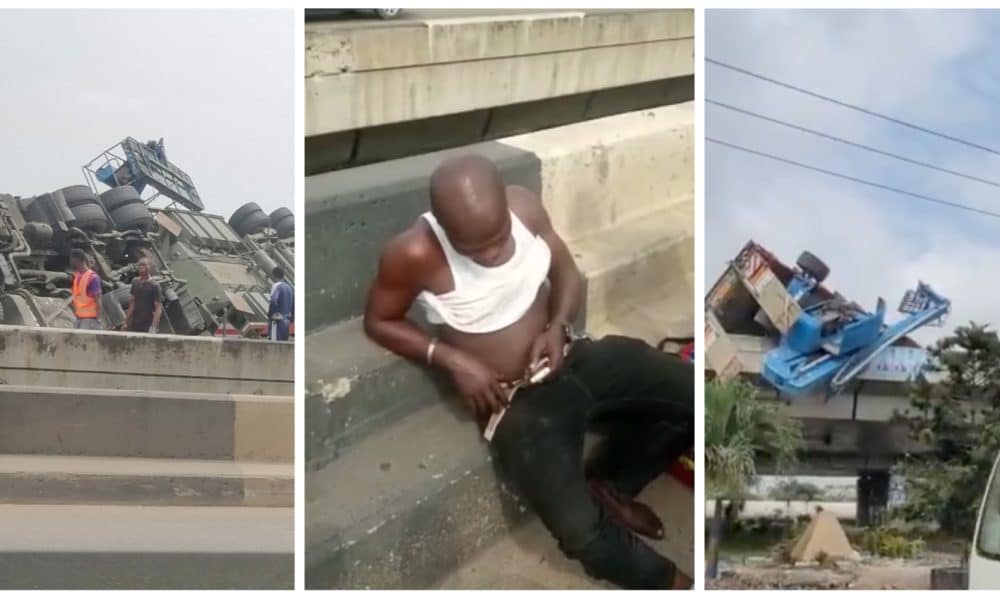 Heavy gridlock is gradually building within the Alausa Secretariat in Lagos, after a trailer carrying a crane on Thursday, overturned on the Otedola bridge.

Naija News reports that the accident occurred while the driver of the trailer was trying to avoid a collision with a broken-down vehicle.

Videos of the incident which emerged online captured the driver of the trailer who sustained an injury in his right ankle being attended to.

Some security operatives consisting of the Nigerian Police Force, Nigerian Army, and Lagos State Traffic Management Authority were also spotted at the scene of the accident.

Meanwhile, a warning has gone out to motorists in the country to observe all safety rules by the Federal Road Safety Corps (FRSC) even as the corps gives a revelation about the number of deaths recorded in road accidents recently.

FRSC disclosed that 61 persons lost their lives in 33 road traffic crashes between May and November 2022 in Borno State alone.

The revelation was made by the FRSC Sector Commander, Utten Iki-Boyi on Thursday in Maiduguri, the state capital.

Giving a further breakdown, Iki-Boyi said between the period in question 151 persons sustained various degrees of injuries in the accidents which involved 285 persons and 46 vehicles.

He noted that most of these accidents are usually caused by speeding, recklessness and use of expired tyres, adding that 37 persons died in ghastly motor accidents on Maiduguri-Damaturu road only in November.

The FRSC sector commander, therefore, warned motorists, especially commercial driver operators to stop using expired tyres in other to prevent most of these accidents.