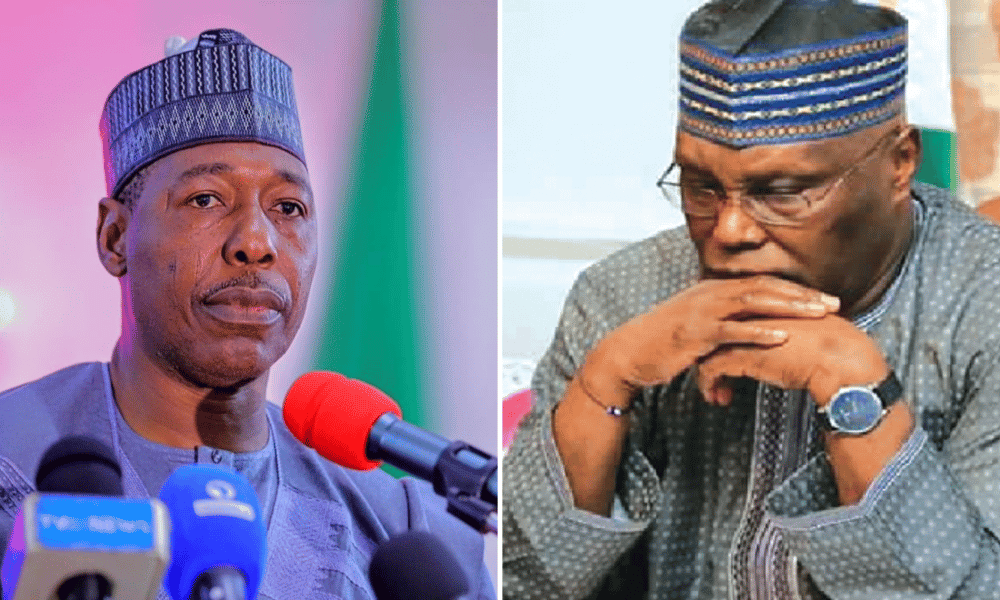 Governor of Borno State, Babagana Zulum, has said that no opposition political party will win any polling unit in the state in the forthcoming 2023 general elections.

The All Progressives Congress (APC) chieftain said this while reacting to the Peoples Democratic Party (PDP) presidential candidate, Atiku Abubakar, visiting Maiduguri a few days ago.

Naija News recalls that barely three weeks ago, some hoodlums attacked the convoy of the former Vice President when he visited Borno for his electioneering campaign.

Gunshots were reportedly heard in Maiduguri during the rally, a development that sent a group of PDP supporters running in different directions to escape being killed or injured.

It was also gathered that the hoodlums vandalized vehicles in the convoy of Atiku at Ramat Square in Maiduguri, the state capital.

Speaking ahead of the 2023 general elections, Zulum on Monday vowed that under his leadership, the APC will ensure that no opposition party win any unit in the forthcoming polls.

Naija News reports that Zulum stated this while addressing party supporters and stakeholders during the inauguration of Chairmen, Secretaries and over 800 members of the Campaign Council at the Government House, Maiduguri.

He said: “It is laughable when I learnt that some people who have stayed away from Borno in the last four years have started trooping in to seek our people’s mandate in the forthcoming coming general elections on the platforms of different opposition parties, particularly the dying PDP.

“I want to state that under my leadership, the ruling All Progressives Congress, APC will ensure that no opposition party win any unit in the forthcoming 2023 general elections.”

The APC governor said it is disheartening that some people seeking elective positions on the platform of a dying PDP in the state are now sneaking into Maiduguri with about N500, 000 or N600, 000 in their possession, causing trouble in the form of campaigns of calumny against the party, forgetting that Borno is APC.

Zulum said: “I want to say that APC is not afraid of any opposition party, considering the fact that the state Government under my able leadership in the last three years has done wonderfully well in the area of security, jobs creation, youths and women empowerment, reconstruction, rehabilitation and resettlement of millions of Internally Displaced Persons, IDPs back to their places of origin.

“However, I want to use this opportunity to apologise to former Vice President and PDP presidential Candidate, Atiku Abubakar, whose convoy was attacked by yet-to-be-identified hoodlums during the Campaign in Maiduguri recently.”